Recent work from our lab and others has demonstrated that the Nogo-66 receptor gene (ngr1) limits how experience instructs the function of developing brain circuitry. In mice, deleting the ngr1 gene permits plasticity within neural circuits of the visual system that is normally confined to a developmental 'critical period' to be retained in the adult. This greater plasticity enables spontaneous recovery of visual acuity in a murine model of amblyopia, a prominent visual disorder in children.

Current efforts in our lab seek to understand how ngr1 limits neural plasticity, and to identify what other contexts ngr1 gates the ability of experience to sculpt developing neural circuits, such as motor and perceptual learning. Our overall goal is to assess if neutralizing NgR1 may be a useful therapeutic intervention for promoting experience-dependent changes in neural circuits that could compensate for maladaptive changes in developing brain circuits arising in neurodevelopmental disorders, such as autism spectrum disorders, or help to stave off decline in cognitive function associated with neurodegenerative disorders, such as Alzheimer's disease.

Below is a schematic that diagrams how we suspect NgR1 functions. There is much to learn. 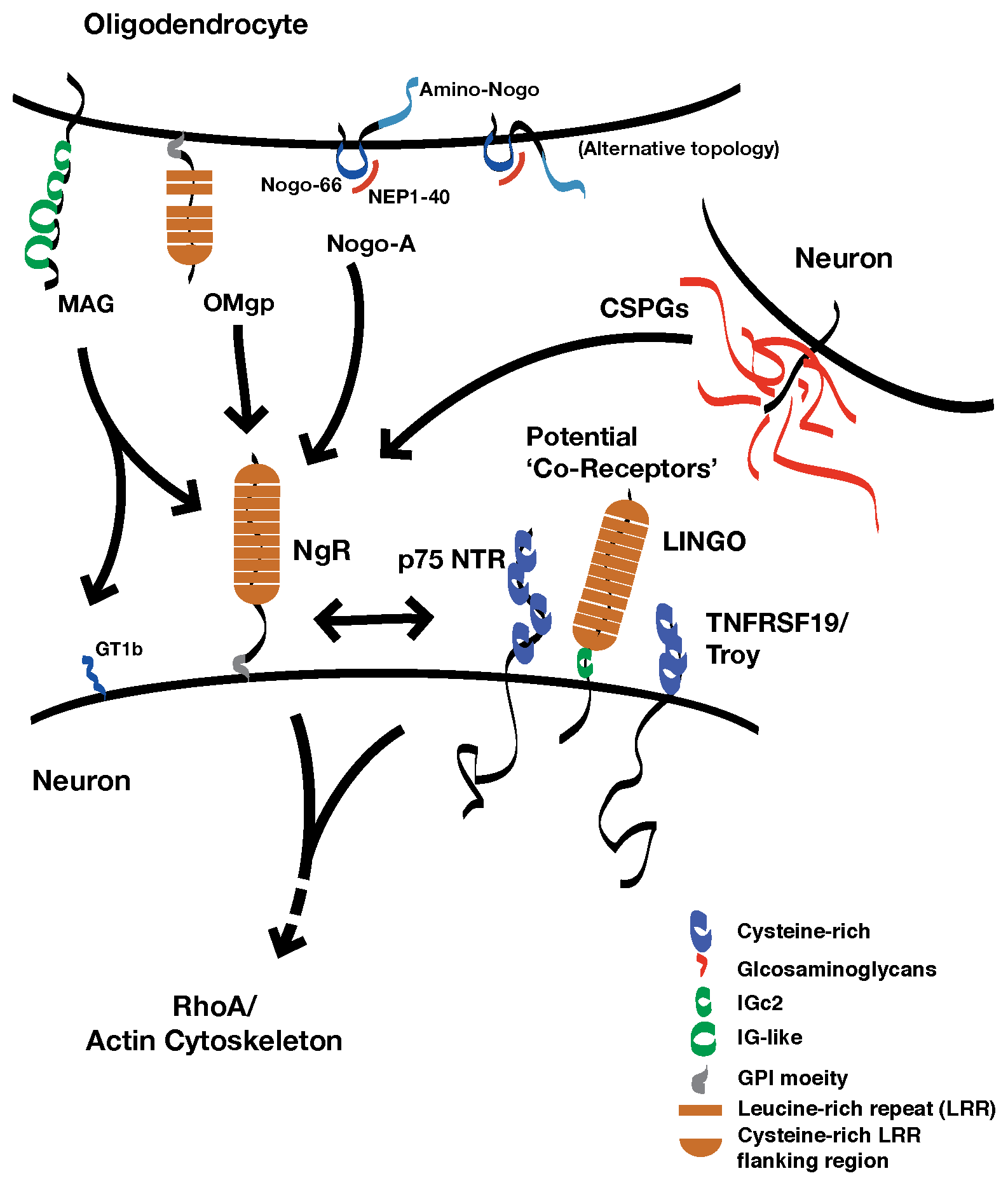 The nogo-66 receptor gene (ngr1) encodes a neuronal receptor, NgR1, for several different proteins present in the extracellular neural environments. Ligands for NgR1 include several transmembrane proteins associated with myelin membranes: myelin-associated glycoprotein, oligodendrocyte myelin glycoprotein, and Nogo-A (reticulon 4a). These proteins inhibit the outgrowth of neuronal processes in vitro. NgR1 also binds to chondroitin sulfate proteoglycans, a family of proteins that are decorated with chains of a specific glycosaminoglycan (GAG), chondroitin sulfate.

NgR1 is attached to the outer leaflet of the plasma membrane by a glycophosphoinositol lipid anchor. Several molecularly distinct transmembrane proteins have been proposed to be 'co-receptors' for NgR1 that transduce a signal for ligand binding within the neuron. However, while these proteins interact with NgR1 in vitro, which of these potential co-receptors may be components of a physiologic receptor complex is not yet clear.

The visual system is an excellent model for exploring how the quality of experiences guides the function of developing brain circuitry. The lab employs several complementary techniques to study plasticity within the circuitry of the visual system.

On the left, the Neurolabware microscope for in vivo imaging. Head-fixed mice are imaged atop a floating styrofoam ball. The position of the ball is tracked, as it the area of the pupil. These metrics reveal the relative attentiveness of the mouse during presentation of a visual stimulus.

An example of imaging neuronal activity in alert mice during a visual stimulus repeated three times. The activity of three neurons transduced with AAV:pSyn-GCaMP6s (circled in red, green and blue) are presented during these three consecutive presentations of the movie. The traces in the corresponding colors at left correspond to each neuron. 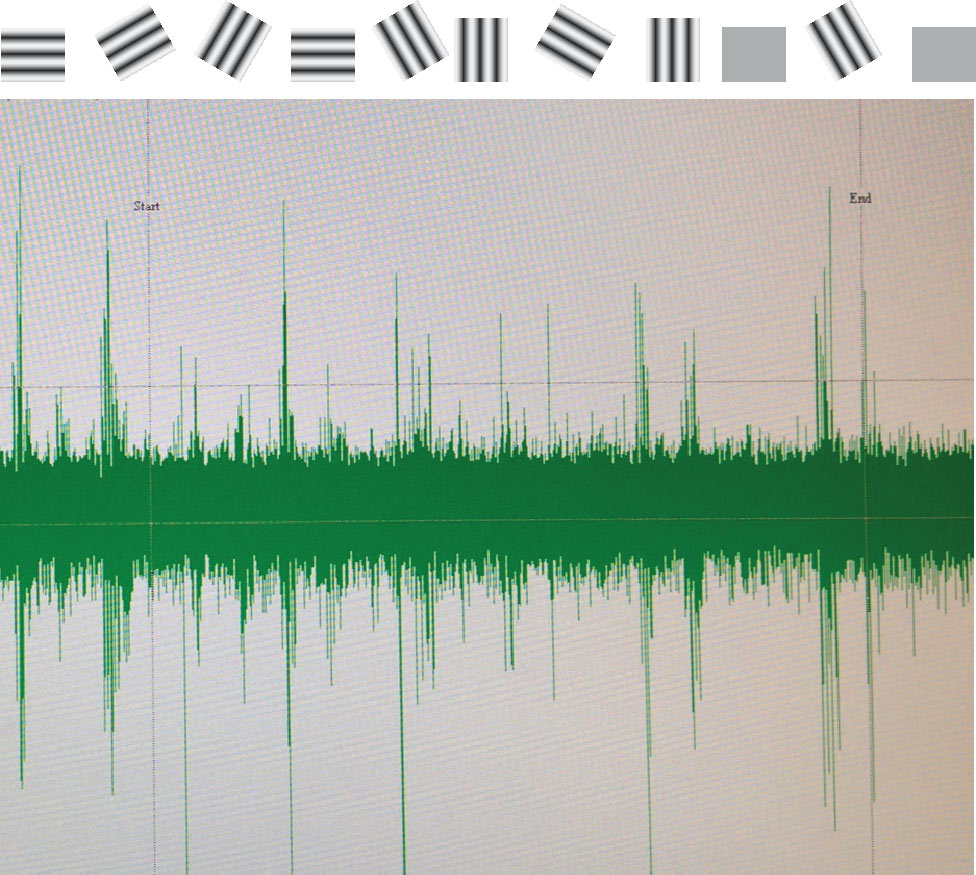 This is the classic method of measuring and comparing the responses of multiple neurons (units) to a visual stimulus presented to each eye individually. In this example, we have presented a series of gratings at different orientations to one eye and measured the local change in potential with resin-coated tungsten microelectrodes. 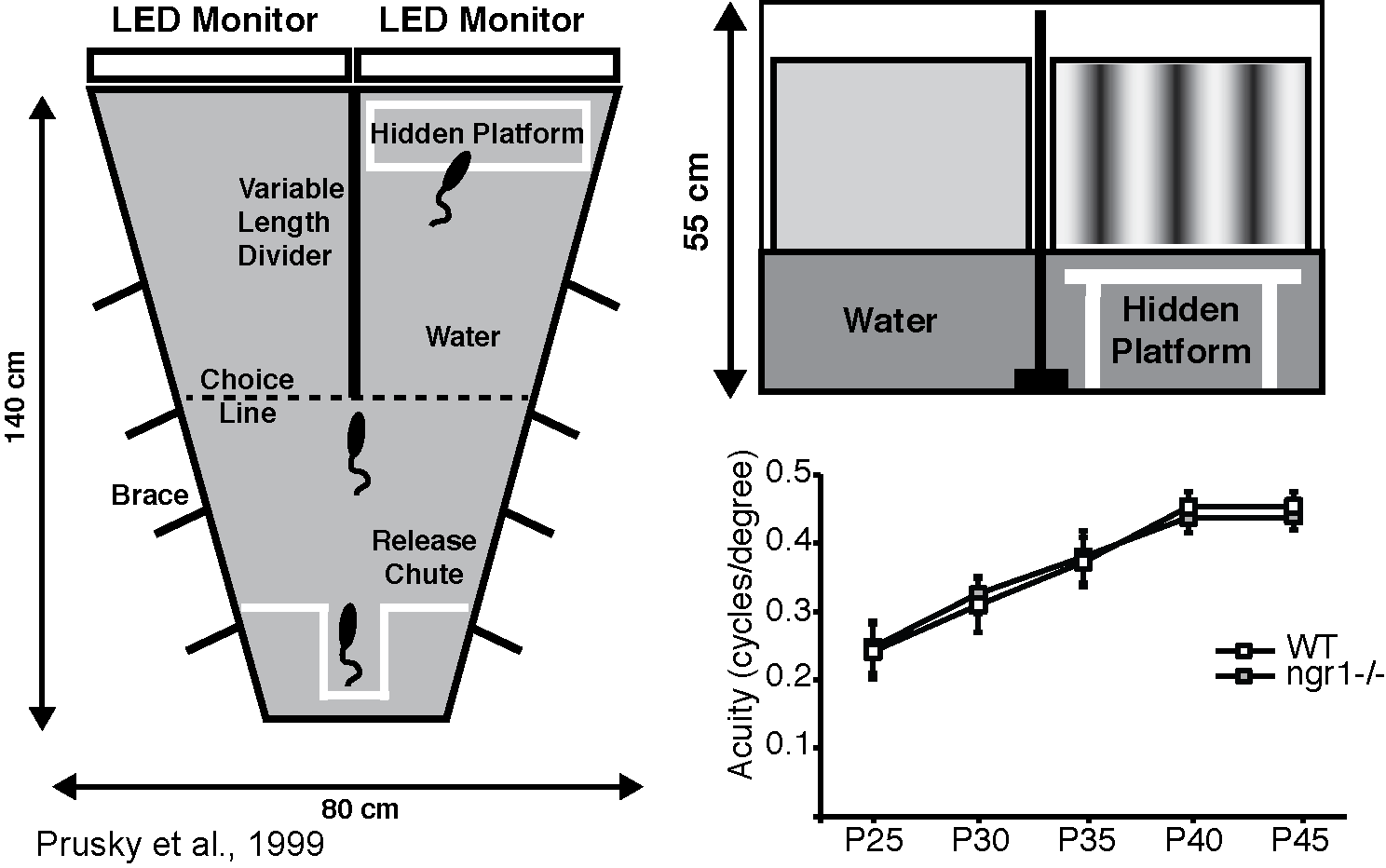 The visual water task is a two-choice water maze in which the position of a hidden platform indicated by a monitor presenting a sinusoidal spatial frequency grating rather than an isoluminant grey screen. Mice readily build this association and we use this test to estimate their visual acuity by determining the spatial frequency at which they can no longer discriminate the grating from the blank screen